The Rise of the Thanam Bow 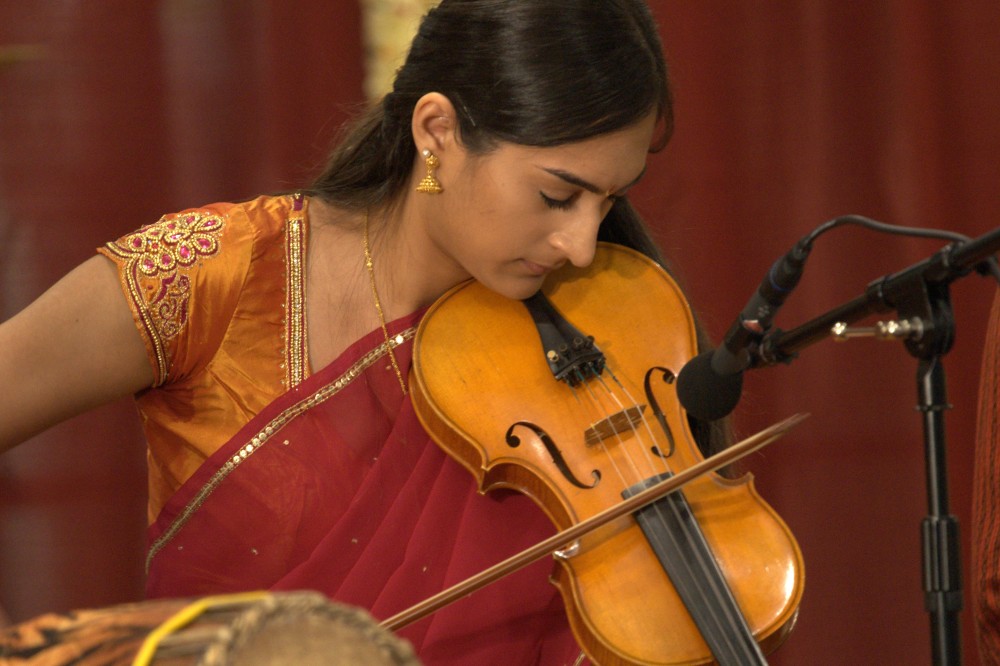 The Rise of the Thanam Bow

It is no secret that the parallels between Carnatic music and Western classical music are numerous. On the violin, these parallels reach a whole new dimension in the realm of Ragam Thanam Pallavi (RTP). Specifically, thanam, a unique aspect of RTP, has evolved over the fifty years.

The RTP became the staple of concerts by the great stalwarts during the middle of the 20th century. Violinists would commonly play thanam similar to the way in which vocalists sang. They employed long smooth bows and connected notes to each other, creating the effect of a singer melodiously rendering the phrase “ananta thanamtha,” a take on the word anadam in Tamil, meaning happiness. However, it soon became no secret that the capacity of thanam on the violin far exceeded its scope in vocal music.

Thanam is a showy and dramatic production of an alapana with swarams. It often includes intense gammaka passages as well as several plain notes as embellishment. What makes these phrases unique is the way they are split and combined with each other. The voice is limited in its ability to split these intricate passages and often cannot make huge jumps in notes as easily as a violinist. On the violin, it is very easy to create a dramatic effect by accenting the bow quickly one second, and then softening the stroke immediately the next. Sliding and jumping from note to note is also much easier and appealing to the ear on the violin. It took no time for young violin stalwarts to realize this and use it to their advantage.

Thanam is as close as traditional Carnatic music gets to western music. On the violin the use of plain notes and flashy bow strokes is extremely appealing to the audience. Thanam rose to a new level when violinists during the 20th century began to take particular interest in a western bowing technique which allowed them so split notes in a unique way that could not be reproduced by vocalist. Over the years this up-bow staccato stroke which is informally called the “thanam bow” has become a staple in the Carnatic violinist’s repertoire. There was initially a hesitance about using such a western technique in the traditional kutcheri, but the thanam bow has become increasingly popular and has extended beyond RTP to find a place in second speed neraval as well.

It is important to note, however, that this is simply one of many advanced techniques used by violinists. Legends such as Sri. Lalgudi Jayaraman have often denounced the use of the thanam bow arguing that true thanam bowing should strictly follow vocal music. Lalgudi Sir’s thanam is renowned for his ability to use gammakas instead of bowing to emphasize the breaks in thanam. Yet, the difficulty of using gammkas, which are more classical and in adherence to vocal music, have led to only a few greats such as Lalgudi Sir to widely use this style. By contrast, although the thanam bow requires great control of the right arm, it is widely considered to be a simpler way to yield a similar effect.

A new generation of musicians, many whom are trained in western classical music, have rendered the thanam bow common in modern kutcheries. From a western- influenced tool in the RTP to more subdued dashes during passages of second speed neraval, this purely western bow technique has found a place in the heart of carnatic sangeetham. The thanam bow is a truly amazing phenomenon not only because of its western roots but its exclusivity to the violin. Innovations like the thanam bow are intrinsic to the evolution of Carnatic music. I would not be surprised to see more techniques like this in all facets of Carnatic instrumental and vocal music appear in the near future.