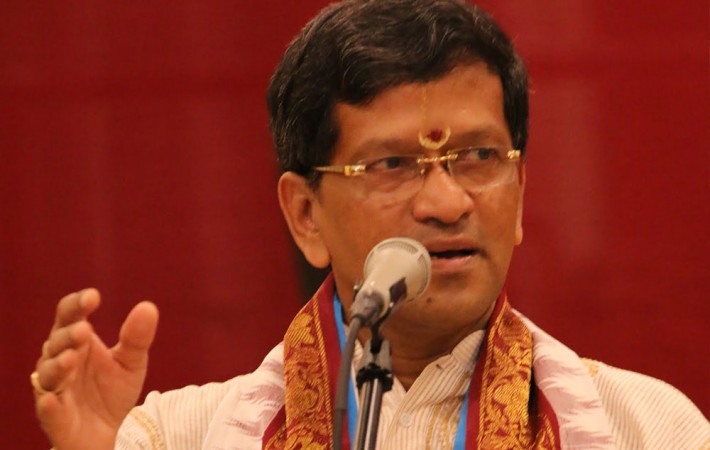 I remember my friend Anantha Krishnan saying, in some context, that it is easy for a good vocalist to make a great impression on the audience simply by singing in perfect alignment with the Sruthi on all notes traversed in the octaves. However this will not just happen. This can only be acquired in one’s career, if the artist puts in incredible amounts of Sadhana not only in musical terms but in anatomical and physiological terms.

Music has to appeal to and “sound good” for everybody including the uninitiated. Classical music can be enjoyed at multiple levels. The average listener listens to the melody, the rhythm, the beauty of the voice, the poetry of the composition and, probably unconsciously, to artist’s adherence to the Sruthi. Music is “pleasant” to listen to, when the Sruthi is in unison and it is true for all listeners, whatever their knowledge level may be. The pleasure that a less knowledgeable listener gets listening to good music is at instinctive level. It is no less important and artists should never forget it. Only when our music reaches out to a much wider and varied audiences – of all ages, diverse social and cultural upbringings, and knowledge levels – does it steps onto the global stage.

Not all vocalists are endowed with fine natural voices. There are many examples, even among great musicians, who started with not so pleasant voices but “smoothed out” and cut out the rough edges by “polishing” the voice by incessant Sadhana. Some have naturally gifted voices, but they too need voice sadhana in order to be fine concert artists. I remember one senior musician saying to me, that “O.S.T. has an excellent voice”. He then explained that what he meant by it was not that it was mellifluous, but that the voice lets him express his musical ideas with effortless ease. Carnatic music certainly is one of the most demanding on the human voice because of its specificity of the gamakas. A vocalist has to have his or her voice in full command in order to execute the musical ideas that come to his or her mind. A professional musician may sing hundreds of concerts a year and is expected to perform for several decades without diminished quality of music. It is a no-brainer to say that musicians have to keep their physical health of their voices in the best condition. They need to train and exercise the voice just as athletes do.

Yet, most Carnatic music students and teachers spend precious little time in voice culture. As a result we hear of several well-known vocalists, who lost their voices completely or had the voices deteriorate over the years. Also many of our performers pay scant attention to aesthetics of stage presentation. We place all our importance on the “substance” of music but little on the “form” of music. Because of this, our music has become a closely held art form that is adored by knowledgeable South Indian Rasikas who understand it but is too forbidding for those who do not get it and so may be turned off by it completely. I heard once somebody referring proudly to his Guru as “musician’s musician”. That is fine. But we want more musicians to be musicians for everybody.

We are all aware, and probably even envious, of the enormous popularity of Hindustani musicians, not only in India but all over the world. They are the famous ones. They are the ones who draw huge crowds and command and get big bucks. They get the titles and rewards. All this has happened not by any accident, but by their music tradition that recognizes proper priorities for musicians. In the Hindustani music tradition, students spend years working on voice culture. They do not rush to learn more compositions or ragas – instead, they spend great deal of time honing their voices and ability to sing in unison with the Sruthi. Many of us have heard stories of how some well-known musician was taught only one raga for an entire year. It is necessary to aim for such perfection.

Our music is deeper, more sophisticated, and more demanding. So, we need to concern ourselves much more with the “equipment”- in this case artist’s voice – than repertoire.

It is no secret that in any Jugalbandi concert, it is the Carnatic musician, whether it is the vocalist or the percussionist, who paves the way and leads in the concert. More often, we score big in the eyes of the handful of pundits in the auditorium. Yet we fall behind in the perception of the public who are in the thousands all over the concert hall.

We have to fix it. The first step is to acknowledge that there is a problem. We are slow in admitting it. Once, after a long discussion about Hindustani musicians, I suggested to a well-known Carnatic musician I know intimately, about instituting a special award for young upcoming artists in Chennai and Bengaluru, who sing well and in perfect Sruthi. He initially thought it was a great idea. But soon he came back and said that it was not “practical” as it may not go well with some senior musicians. Such sentiments, I am afraid, are widespread among most of our musicians.

If you don’t even acknowledge the problem, how do you solve it?

May be things will change slowly and gradually. Today I say, somewhat prophetically, that our youngsters (YSL included) are going to change it. They will take the best aspects from Hindustani Music and emulate all that is good in the western classical tradition and produce our own Rashid Khan, 21st century Pavarotti and Balamurali. They will learn not only the art of sound production but the science of sound production. Carnatic musicians will not be relegated to performing in temples and school auditoriums to south Indian crowds only (not that there is anything wrong with that) but do it on a regular basis, in Carnegie hall, Albert Hall and great concert hall of Milan, just as Hindustani musicians do today.

If all this happens in the next 10 or 15 years, I will be there to enjoy it. If not, isn’t Carnatic music “heavenly”, and heard “up there”?

While browsing through the internet, I found the following by one Ananth Vaidyanathan- I thought some youngster may find it interesting.

The broad aspects of the technique and training are as follows:

1. Singing, not speaking, is the nature of the voice. So voice engineering is a process of ‘unlocking’ the innate abilities in a voice existing by its very anatomical and physiological nature.

2. The anatomical areas which are relevant to the working of the singing voice are

3. Diagnosing a voice on the above aspects and correcting the basic techniques improves the condition, health and abilities of any voice.

4. Adaptation of the techniques has to be done in accordance with the character and requirements of each singing system.