Random Musings on Comparison Between Carnatic and Western Classical Music 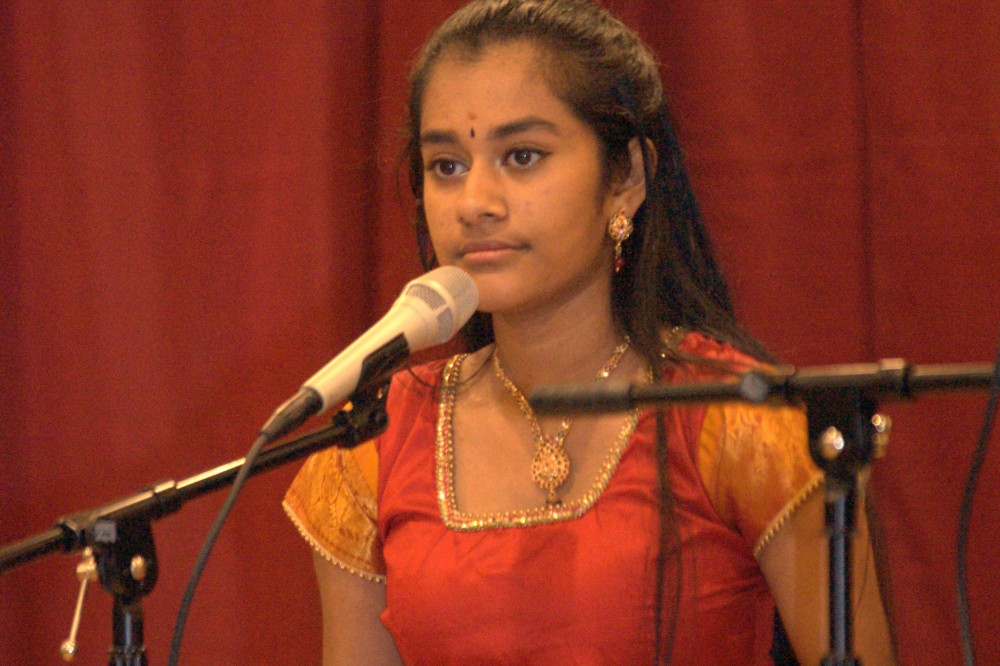 Random Musings on Comparison Between Carnatic and Western Classical Music

For any person exposed to the Carnatic system of music as well as to the Western classical system of music, identifying the similarities and differences becomes a natural path to explore. Having been exposed to Carnatic vocal as well as Western piano and clarinet, I have found myself oftentimes drawn into this fascinating line of inquiry. Here are some aspects I would like to touch upon in this essay:

Western music utilizes time signatures at the start of every piece to denote rhythmic structure. In western terms, a time signature of 4/4, or common time, signifies that there are 4 beats per measure, and the quarter note gets the beat. As a result, 1 measure of 4/4 time has 4 quarter notes, and 2 measures fit 8 quarter notes. Those 8 quarter notes are equivalent to 8 aksharams in one cycle of adi talam in Carnatic music. In Carnatic music, each aksharam is subdivided into 4 matras in standard (chathurasra) nadai. Therefore, 1 cycle of adi talam has 8×4=32 matras, just as in 2 measures of 4/4 time, you can fit 32 sixteenth notes. Another popular time signature is 3/4 time, meaning that there are 3 beats per measure with the quarter note getting the beat; this is equivalent to rupaka talam. A more complex time signature, such as (2+2+3)/8 mimics the Carnatic misra chapu, as it is counted as “thaka-thaka-thakita.”

One area in which Western music and Carnatic music differ is in the concept of harmony. Western music includes various types of harmonies. For example, in the key of C major, or raga Shankarabharanam, if someone were to sing or play the Carnatic equivalent of “G RR SS” while another person played “P MM GG” at the same time, this would be one form of western-style harmony. However, this is not found in Carnatic songs or group singing. Another form of harmony is seen in chords, which also include different pitches being played at the same time. For example, the I (roman numeral) chord includes the 1st, 3rd, and 5th scale degree of its respective key, or the notes Sa, Ga, and Pa in Carnatic terms. This layering of notes is something that is not seen in Carnatic music. On the other hand, Carnatic music is unique for its use of gamaka, something not often found in other styles of music. This sets Carnatic music apart from the rest, as it is difficult to perfectly replicate Carnatic gamakas in western notation, and indeed to play them on instruments such as the grand piano. Even though there is no concept of gamaka in western music, forms of connecting notes do exist, such as through “slurring.”

Western music also includes some rhythmic concepts that are similar to Carnatic nadais. For example, triplets in western music can be compared to tisra nadai in Carnatic music. There are different types of triplets. An eighth note triplet is three little beats per big beat, fitting within one quarter note, and is counted like slow speed tisra nadai (3 matras/aksharam). A sixteenth note triplet is six 6 matras per aksharam, and therefore mimics fast speed tisra nadai. Another western concept, known as a hemiola, is comparable with Carnatic chathurasra tisram. The term hemiola can be used to describe patterns of three being placed over a four beat cycle, rather than being compressed into one beat like triplets/tisra nadai. This is similar to the idea behind chathurasra tisram in Carnatic music.

Overall, as you can see, there are so many interesting similarities and differences between the two musical systems. I just touched upon a few points here, but there are so many more facets that one could explore in a similar way—but that’s a tale for another day.