Peeling the Onion and Piercing the Veil 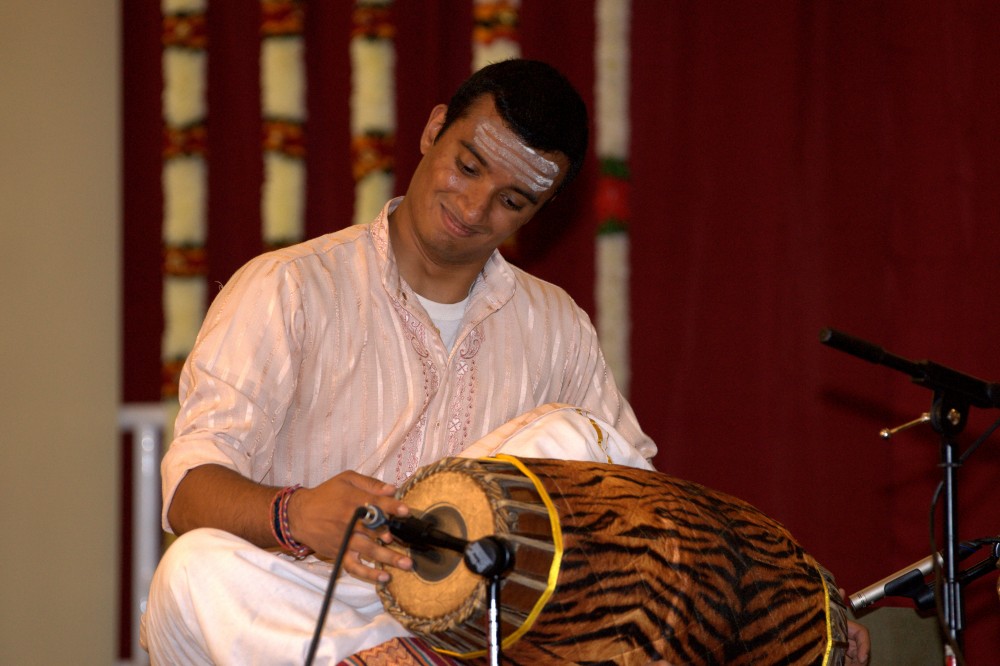 Peeling the Onion and Piercing the Veil

The layer analogy fits Carnatic music well, because the more you learn about this ancient artform, the more you realize there is to learn. Each polished krithi, each partially mastered ragam, each absorbed nugget of information contributes to uncovering the next layer, and this process continues ad infinitum. There is no beginning or end, only the journey involved.

One foundational layer that few folks ever uncover is concert accompaniment. Accompaniment in general, and mridangam accompaniment especially, is somewhat of a dark and misunderstood art as far as Carnatic music is concerned. Very few developing artists are given or seek out the knowledge of how accompaniment truly works, instead receiving a piecemeal education that deals with the practical elements of artist-pakkavadhyam interaction, like leaving space for an ending, letting the mridangist and violist tune before starting a song, and of course recognizing the mohra and korvai at the end of a thani avarthanam (or at least asking the mridangist to wink seductively when they come to pass). But this barely scratches the surface of what accompaniment is all about; the subtleties and nuances that give accompaniment weight are frequently lost in the noise, so to speak. And that is a shame, because these concepts add an entirely new dimension to how one listens to and enjoys music.

Mridangam accompaniment is a study in contradictions. It is a thinking man (or woman)’s game, and yet the best accompaniment often comes without forethought or conscious decision making. It is a performance of calculated effect and histrionics, but also a deeply emotional act devoid of any calculations. It is both loud and soft, overbearing and understated, fast and slow, continuous and jagged, edgy and comfortable, but also every variation between those extremes. In short, mridangam accompaniment is best described as chameleonic, taking whatever form it needs to take in order to enhance a concert.

Accompaniment is something that cannot be taught, only something that can be imbibed. It is possible to send someone onto stage with a fixed plan of attack, a formula of sorts, a daisy-chained if-then-else structure that can be applied universally. But that is crude at worst and limited at best. The majesty of accompaniment comes from the spontaneity, the sudden flash of insight, the suddenly perfect marriage of music and mind.

Many people are surprised to learn that mridangam accompaniment is entirely improvised. A mridangist does not (and should not, although this is purely my own pontification) learn of a song list beforehand, and he or she certainly does not preemptively start matching phrases and patterns to sangathees. A mridangist doesn’t receive a recording of concert manodharmam beforehand, and rarely is a mridangist told the final korvai for the main piece. A mridangist will likely know less than half of the songs that will be sung in a concert, leaving it up to his or her guile and ingenuity to figure things out on the spot as they transpire. And although much of Carnatic music is in fact centered around improvisation, this flying-by-the-seat-of-the-pants mentality is on a slightly different level.

The first rule of mridangam accompaniment is that there are no rules. This might seem absurd, but the prerogative of choosing what to play and what not to play is entirely in the hands and mind of the performing artist. The license to experiment and play freely breeds a culture with a vast variety of styles and approaches. There is an inherent trade-off between following the thalam and accompanying the song directly; doing one usually precludes doing the other. The choice of when, where, and how to balance the two is one of the critical decisions that a mridangist can make, and it has an underrated but tangible impact on the concert as a whole.

The great masters of mridangam all developed banis and subcultures that continue to grow and evolve to this day. When they play, it is critical to recognize that each stroke, each note, and each phrase has emotion, weight, and conscious thought associated with it. Accompaniment is like a branching tree with options at every node, and each option carries with it specific implications and consequences. With seemingly infinite paths to take, why was this particular path chosen? What prompted this phrase usage as opposed to another alternative? Why modulate at this specific part of this specific line? These are the kinds of probing questions that help tease out the nature of good accompaniment, but also define particular styles of play. Some schools seek to follow every phrase the main artist renders; other schools settle into a groove and stick with it, come what may. Still other schools balance the two, applying elements of both concepts where they seem to fit. Regardless of stylistic preference, which is intrinsically subjective, good mridangam accompaniment enhances, emotes, embellishes, and excites. Good mridangam accompaniment is precise, accurate, and cleanly executed. And most importantly, good mridangam elevates the entire concert experience, for performer and listener alike. Poor mridangam accompaniment misses any or all of these qualities.

One of my pet peeves is with post-concert feedback, when I hear people tell a mridangist that his or her thani was fantastic. The thani avarthanam is an easy point to focus on because it is a mridangam solo, but it is far from the only important thing that a mridangist provides. If you only pay attention to the mridangist during the thani, then you are seeing the world in planar form when it really has many more dimensions. The next time you take in a concert, try paying attention to just the mridangist for a single song. I promise you will not be disappointed. The highest praise one can give a mridangist is that he or she accompanied well, and that fact can only be ascertained by careful listening and analysis. Try breaking down what a mridangist plays, and above all, understand the why. Whether you are a singer, an instrumentalist, an accompanist, a caring parent, a rasika, or simply a patron of the art form, achieving a deeper understanding of accompaniment will significantly expand your horizons and change the very nature of how you hear Carnatic music.

The message, as always, is to dig deeper into the onion that is our music, never settling for the status quo but always seeking out new things to absorb and internalize. Understanding the hidden layers that hide beneath the surface allows not only for better listening, but also for better enjoyment.