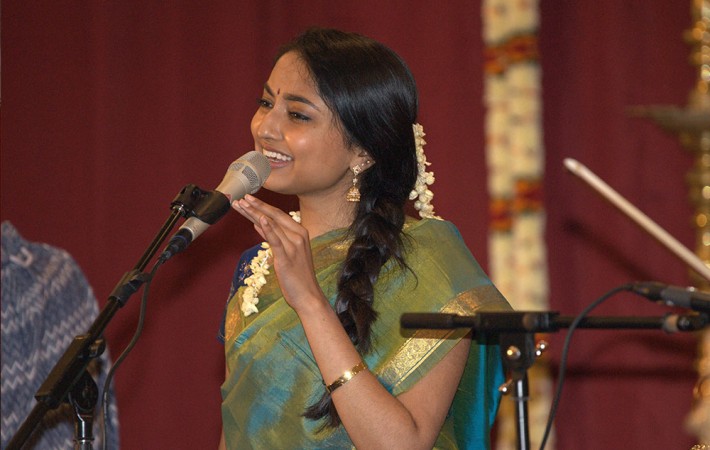 In the South Indian classical tradition, continuing to improve your craft implicates such single-minded dedication that Carnatic musicians seldom venture into other styles of music. This approach certainly works; diving headfirst into several genres means focusing on none of them. Our tradition is vast enough – in its history and in the potential for innovation – that even if you were never to step outside the genre, you would find sufficient material for a thousand lifetimes.

As a student of Carnatic sangeetham, I came upon other styles of music by chance when I watched a cappella performances in college. Out of all of the groups at my school, none interested me as much as Shades, whose ranges from soul and R&B to jazz, Motown, gospel, and traditional African music. At first, I couldn’t put my finger on the reason that this kind of music appealed to me so much. But when joined Shades and told my fellow group members about my musical training in the Indian classical tradition, they replied, “That’s why you can riff so well!”

I mulled over this for a while. From great masters to students, almost everyone involved with Carnatic music claims its dominance over other genres. The claim is sizeable, but evidence suggests that it is well founded. Whether it’s because Indian classical music is so ancient, or because its melodic and rhythmic complexity are consummate, it seems that the skills and techniques used in our tradition make every other style of music easier to reproduce.

The most basic of these parallels are tonal and rhythmic accuracy, refined by alankarams and other exercises that we learned when we were just beginning the journey. This simplifies the process of learning most other styles, including classical Western music. Well, then, where does the African-American tradition come in? How does it differ from the rest of the Western diaspora, and why is it more analogous to Carnatic music?

It took a yearlong intellectual journey into R&B and soul to be able to answer that question, and the finer points are still difficult to articulate. From what I’ve gathered, African-American music combines elements of Western scales and predominantly West African rhythms and vocal stylings. Over the years, this has added several layers of complexity to the basis of classical Western music, such as heavy syncopation, swing time, riffing, belting, and sliding. The result is a genre that classical Western, opera, and “white people pop” musicians often find difficult to mimic. So why, then, did I immediately feel like an insider to this tradition?

As it turns out, the vocal motions that characterize African-American singing are particularly transferable to the necessities of Carnatic music. In alapana singing and embedded in the more intricate sangathees of a krithi, fast and precise vocal runs encompass a large part of what it means to properly execute Carnatic pieces. The English translation for this is “riffing,” an eerily similar combination of traversing the octaves and stretching the notes for effect. The word brigaa comes to mind when I think of Jazmine Sullivan’s 42-note run in her rendition of “Home.”

Another intriguing parallel lies in the Carnatic tendency never to let notes lie straight. Gamaka, the use of in-between frequencies to stretch the boundaries of a note and carry each swara to the next, is one of the reasons why Western musicians find it hard to pick up Indian classical music. It’s also why they often have trouble reproducing soul and blues in the original style. The “slides” that distinguish sankarabharanam from a plain major scale are comparable to the ones that install Alicia Keys’ “Fallin’” firmly within the R&B schematic. This is at least part of the reason why I was able to intuitively understand and execute much of the note-stretching vocal acrobatics that typify the world of African-American music.

Finally, vocal production in Carnatic music is rooted in the chest voice, a sound that is louder, more resounding, and vocally healthier than sounds produced in other regions. It also considerably shortens vocal range, as the use of head voice and falsetto can extend the upper end of the frontier to varying levels. Indian classical musicians do not use “false voice” to traverse more notes or octaves. In compensation for this, Carnatic voice culture involves extensive stretching of the lower end of the range, the mandhra sthayi, as well as careful development of the chest voice even in the tara sthayi. The result is comparatively large potential in the chest voice. This worked to my favor in Shades, where I am interchangeably used as a soprano, alto, or tenor depending on which voice part is needed most. Though my range is at best average in the world of Carnatic music, it’s considered huge when I cross over to other styles. I was also unwittingly labeled a “belter,” since my voice production in the tara sthayi allowed for loud, clear, high notes instead of defaulting to the weaker head voice. Music of the African-American diaspora makes frequent use of female vocalists with large ranges, long belted notes, and strong chest voice production. The transferable nature of my Indian classical skills meant that my training was particularly helpful here as opposed to in the classical Western vocal genre.

Analyzing the parallels between South Indian classical music and African-American music did not influence me to believe that the Carnatic tradition is simply a vehicle to other styles. On the contrary, it has led me back in the other direction. The skills I’ve learned in Carnatic sangeetham are even more immense than I thought; they can make difficult genres easier, make complex concepts intuitive, turn a vocalist into a shape-shifter. At this point in my musical education, Carnatic music is looking more and more like the root of all music. I am more aware than I’ve ever been of the cosmic limitlessness of our tradition, and of how lucky I am to have been given the privilege of growing up with its inspiration.